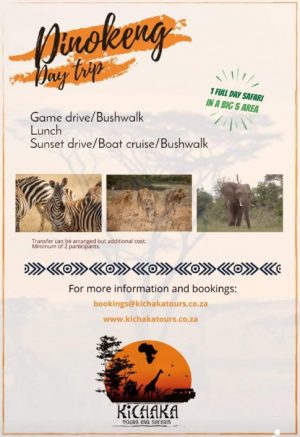 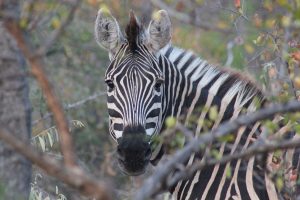 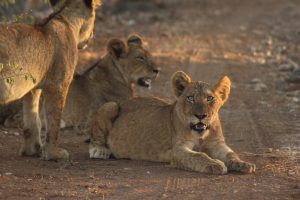 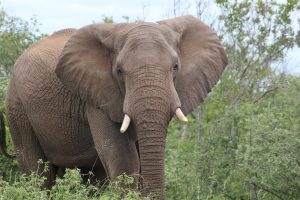 One Full Day in a Big 5 Area

The Dinokeng Game Reserve is a large wildlife sanctuary in the province of Gauteng, South Africa, contiguous with Pretoria and Johannesburg. The reserve is the only wildlife sanctuary in Gauteng that offers Big five game free walks and is available for visitors to explore. It covers an area of approximately 21,000 hectares. Dinokeng is the language of the baTswana and baPedi people, translated as “a river place” and the reserve is named for the many rivers that flow through it on their way to joining the Limpopo and Orange rivers. 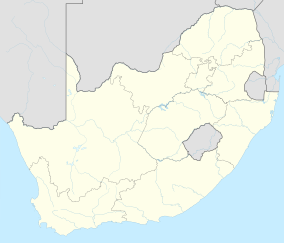 The Dinokeng Game Reserve is part of the Gauteng government’s “Blue IQ” project (an entity of the Gauteng Department of Economic Development).[1] The initiatives for conservation taken by the Gauteng Provincial Government has led to the establishment of the Dinokeng Game Reserve that has promoted the concept of ecotourism in Dinokeng.[2] Back in 1997, at the time, the senior Prime Minister of Gauteng, Tokyo Sexwale, announced a project to develop “Big Five” wild animal sanctuaries in the northeastern part of Pretoria. The main purpose of the government to build Dinokeng Game Reserve is to create tourism through the use of local natural resources, thereby increasing the employment rate and living conditions of local people.[1] The goal is to promote local socio-economic development through the development of “all Africa” destinations, especially those that are historically disadvantaged.[1] The government will help with this project and will work with local landowners to attract private sector investment and ultimately achieve a self-sufficient tourism-based local economy. The Gauteng Provincial Government and more than 170 landowners have developed the concept that ecotourism can be a source of sustainable rural employment for rural communities.[1] The formal planning of Dinokeng and negotiations with landowners began in early 2000. The Dinokeng Game Reserve was officially opened on September 22, 2011, Big five animals such as leopard, lion, elephant, and buffalo were gradually introduced。Until 2018, a group of black rhinoceros wasintroduced into the reserve, making it the Big 5 Reserve in the true sense.[3]

Dinokeng game reserve partnered with the South African government to enforce laws that protect the natural resources of protected areas.[2] Most employees in Dinokeng Game Reserves are from local residents living in protected areas and local residents from the communities surrounding the Reserve.[3] At Dinokeng, it implemented different actions that helped spread environmental awareness to surrounding communities and visitors. Wildlife and Ecological Investment (WEI) conducted ecological surveys and biodiversity monitoring in the Dinokeng Game Reserve.[9] Protected areas use the data collected and analyzed by WEI to review changes in protected areas, and management can gain insight into the operation and health of protected areas. In addition, baseline data can contribute to future professional research or management decisions.[9]

In fact, there are just two large enough wildlife sanctuaries to self-regulate, Kruger National Park and Kgalagadi Park in South Africa.[3] All other reserves such as the Dinokeng game reserve must be managed by people to maintain a predator-prey balance and avoid inbreeding. The Dinokeng game reserve is a member of the Lions Management Forum (LiMF), a community of reserve managers from all over the country who shares management experience, discusses and finds a management solution that is suitable for long-term subsistence of lions.[3] Although the Dinokeng game reserve has successfully managed the total number of lions through selective contraception, the reserve must address the existence of too many young men. In a vast ecosystem, nature will provide solutions.[3] As sexual maturity, young males will be driven out by the dominant males, and eventually, they will find new pride for themselves. But this natural rule is not applicable to the small reserves, such as Dinokeng. Pressure from the dominant male lion has caused young males to try to escape from the reserve. This can cause serious damage to the perimeter of the reserve. At Dinokeng game reserve, managers make decisions based on evidence and apply ethical principles to determine the management scheme for lions.[10] They value the overall ecosystem approach rather than species-specific approaches, consistent with regional and international laws, policies, guidelines and strategies.[10]

The cheetah is the second most threatened carnivore in South Africa after the African wild dog. They are listed as endangered species in South Africa.[11] Cheetahs have disappeared from 76% of Africa’s historical geographic regions and almost all of Asia’s vast historical regions.[3] In the past 13,000 years, cheetahs have been killed because of threats to livestock and human security.[3] Over time, due to crop cultivation and urban development, the cheetah population has been insufficiently spaced. Most importantly, wildlife and humans do not coexist well.[3] One way to deal with this problem is to establish wildlife sanctuaries and isolate humans from animals to ensure the safety of both parties. The challenge with this solution is the limitation of natural gene flow.[3] Wild cheetahs appear in three locations in South Africa. First, huge reserves, such as Kruger National Park and Kgalagadi, with a large enough gene pool with more than 600 cheetahs in total, so they do not require human intervention and management. Second, in the farmland on the border of Botswana, the free-roaming population is 350-400. Third, there are about 340 scattered cheetahs distributed in 54 reserves including the Dinokeng game reserve. Each protected area has an average of 6 or 7 cheetahs, which means that inbreeding is a problem that needs to be avoided.[3] Therefore, the Dinokeng game reserve is part of the EWT (Endangered Wildlife Trust) Cheetah Metapopulation project. The purpose of the Metapopulation project is to prevent this inbreeding and to ensure the long-term viability of cheetahs in small fenced reserves, also ensure the long-time genetic and demographic integrity of the collective population.[12]

Be the first to review “Dinokeng Day Trip” Cancel reply 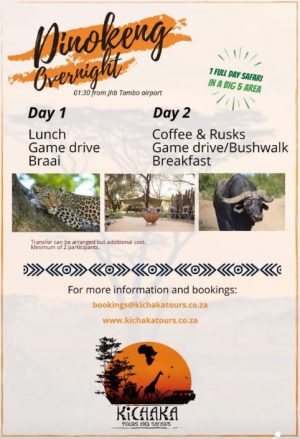 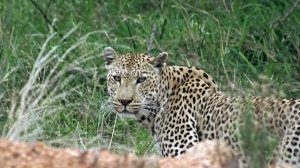 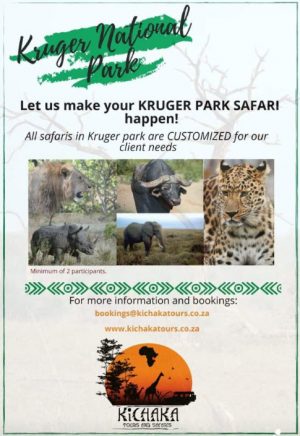 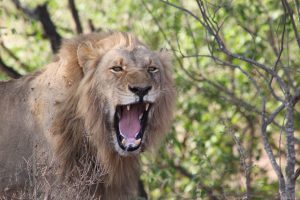 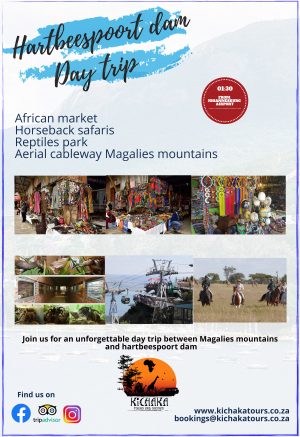 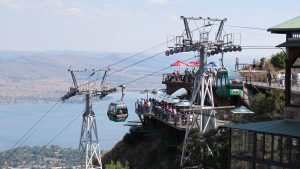